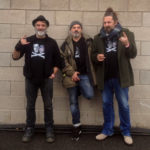 Alba Sarraute is versatile artist. Between 1997 and 2002 she specialized in singing, theatre, circus (teeterboard, springboard, flour acrobatics and hand balancing) at the school Aula de Teatre in Mataró, Rogelio Rivel School in Barcelona, and Academy of Fratellini Contemporary Circus, where she graduated.

She worked in Rome with the company Fattore K, directed by Giorgio Barberio Corsetti; participating in the creation of Paradiso (2003) and Argonauti (2004). In 1997, at a very young age, she founded her own theatre company Terraq’ua with other artists. Two years later she created her solo Mirando a Yukali, which toured during 5 years (in Europe and South and Central America) and awarded at the Festival of Female Clowns in Andorra and at the FiraTàrrega (2009).

With her own company, Cia. Alba Sarraute, she created Soy la otra (LA DIVA) (2010), co-produced by the Clown Festival of Cornellà, and that later was presented at Oporto (Fetei), Luxembourg and France. In parallel, she also participates at Clowns without Borders in Haiti and Lebanon. From 2007 to 2012, she works with Cirkus Klezmer.

In 2009, Alba takes part in the creation of the musical and circus show Llits with Albert Pla and Lídia Pujol co-produced by the National Theatre of Catalonia, CAER of Reus and Sant Cugat Auditorium. In 2010 she performed in the show Badomies (5 musical tales), produced by the Andorra’s Culture department, CAER of Reus and Vilanova i la Geltrú City Council.

In 2011, with the company Circol Maldà she participated in the show Mestre i Margarita, directed by Pep Tosar, premiered at Temporada Alta in Girona. In 2012 she presents Las Navidades en el Teatro Circo Price. In 2013, Alba performs with the Company Animalario in Capitalismo hazles reír, directed by Andrés Lima.

Alba has also worked as a teacher at l’Aula de Teatre of Mataró, at Rogelio Rivel Circus School and at  Codarts, University of Arts in Rotterdam. Stage director, playwright and sketcher, graduated in fine arts in the drawing specialty at the University of Barcelona and in direction and dramaturgy at the Institut del Teatre. He began his career as a stage designer, actor and professional clown, founding the theater company for all audiences Clownx Theater, with which he won the awards Xarxa per Ot for el Quixot (1998) i Willy (2002). Later, he focused on stage direction to explore new paths of scenic creation. In 2014, he created the Rhum show and founded the company Rhum & Cia, as the posthumous tribute to Clown Monti, with whom he was creating a show. After the success of Rhum (the Zirkolika 2014 Award for the best clown show) and the second show created with the same company, Rhümia (Grand Prix BBVA 2016 for the best circus show), he decides to dedicate its energies to new collectives and new projects.

He has worked and created shows with different artists and circus and theater companies, such as Monti & Cia, Somso, Cia. Ífnima La Puça, Divinas (Unnim 2012 Award for best show by Enchanté), Le Croupier, La Mandona, The Feliuettes. He has also directed the staging of musical groups such as Love of Lesbian, Catarres, La Pegatina, Blaumut, Diluvi or Marc Parrot, among others. He has also been the assistant director of Agustí Villaronga, Josep Maria Pou, Magda Puyo, Ramon Simó, Miquel Górriz, Marc Martínez and Jordi Prat i Coll. Torras is very influenced by multidisciplinary art, which he has applied in live music, contemporary dance, circus acts, live painting; always searching for a very unique and dynamic language, always based in the absurd mechanism of comedy and the multiplicity of visual and sound resources at the service of emotion.